The Cardiac Arrest Algorithm takes its place as the most important algorithm in the ACLS Protocol. There are 4 rhythms that are seen with pulseless cardiac arrest. They each will be reviewed throughout this section of the course guide. These four rhythms are pulseless ventricular tachycardia (VT), ventricular fibrillation (VF), asystole, and pulseless electrical activity (PEA). There are 2 medications that will be focused on within the Cardiac Arrest Algorithm, epinephrine and amiodarone. Lidocaine and magnesium will be mentioned briefly. During ACLS, epinephrine can be given 3 ways: intravenous; intraosseous, and endotracheal tube. The primary method used is intravenous. When given intravenously, always follow the IV push with a 20 ml normal saline flush.

Intravenous Push/IO: 1mg epinephrine IV is given every 3-5 minutes.

Note: There is no clinical evidence that the use of epinephrine when used during cardiac arrest, increases rates of survival to discharge from the hospital. However, studies have shown that epinephrine and vasopressin improve rates of ROSC (return of spontaneous circulation). 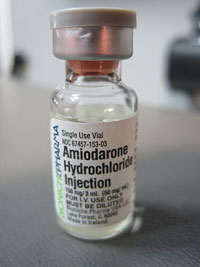 The mechanism of action of amiodarone remains unknown, but within the framework of ACLS, amiodarone is used primarily to treat ventricular fibrillation and ventricular tachycardia that occurs during cardiac arrest and is unresponsive to shock delivery, CPR, and vasopressors.

Amiodarone should only be used after defibrillation/cardioversion and epinephrine have failed to convert VT/VF.

Amiodarone can be administered by intravenous or intraosseous route.

The maximum cumulative dose in a 24 hour period should not exceed 2.2 grams.

Infusions exceeding 2 hours must be administered in glass or polyolefin bottles containing D5W.

Amiodarone should only be diluted with D5W and given with an in-line filter.

Lidocaine is a antiarrhytmic that can be used as a replacement for amiodarone if it is not avaliable.

The maximum total dosage of lidocaine is 3 mg/kg.

Magnesium sulfate can be used during cardiac arrest primaryly to treat torsades de pointes that is caused by a low serum magnesium level.

Provide an initial dose of 1-2 grams IV or IO diluted in at least 10 ml of NS. Give the dose over 5 minutes.

Watch Part 1 and Part 2 of the Cardiac Arrest Video Review.

Top Questions Asked on This Page

Learn more about the course…